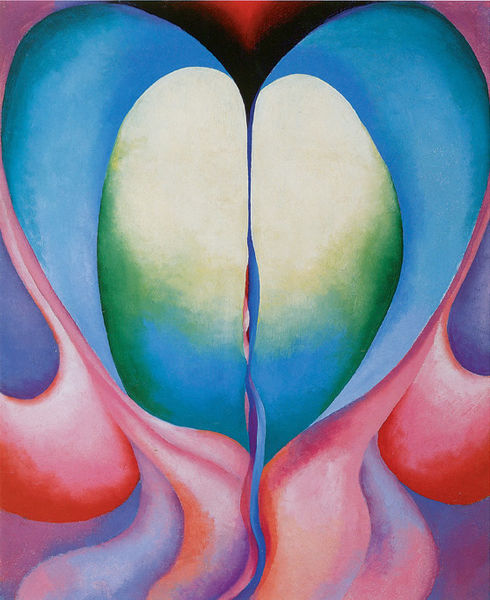 “O’Keeffe perhaps didn’t need Stieglitz to achieve her artistic prime. Maybe she would’ve found herself in New Mexico fueled by Nature and its rugged beauty faster without him. Whether or not the world would’ve embraced a woman and her art without his controversial influence is another question. Today, would we say Georgia O’Keeffe is a great woman artist, or a great artist?” – my article in Salon, July 16, 2016

In February this year, I started a blog post about Georgia O’Keeffe with this:

“I remember the first time I came across Georgia O’Keeffe in high school art class. Her paintings of Southwestern-themed landscapes and cow skulls made an impression, but the color-saturated forms of her flower close-ups are images I can still see in my head. Her work is unique, brilliant. I love her poppies, their gigantic shapes and ripples and forms. Every time I see a Georgia O’Keeffe, I pause. I guess that would make me a lifelong fan.”

If that was true then, it’s even truer now.

In March 2016, I learned a complete retrospective of Georgia O’Keeffe’s work would be on exhibit at the Tate Modern in London beginning in July, this month. But that’s not all — Stieglitz’s work of O’Keeffe would be at the Tate Modern to accompany her exhibition, as well. That, to me, meant someone needed to say something, to give his pictorial commentary context, to open up discussion on what his work did in the reception of hers. His portraits of her, many of them nude before she began to wake up and refuse, changed the perceived meaning of her art for the past 100 years.

I spent time immersed in the analysis and writing of O’Keeffe scholar, Barbara Buhler Lynes, and, paired with the novel Georgia by Dawn Tripp (which I loved), began to formulate how O’Keeffe’s story is relevant to our time.

The result: my article has been published by Salon on July 16, 2016, entitled: Georgia O’Keeffe and the Gender Debate: Can a Woman Be Great, or Only a Great Woman?

I am beyond delighted!

4 thoughts on “Article in Salon: Georgia O’Keeffe and the Gender Debate”